This Exchange took place at the annual Southampton Science and Engineering Festival in 2019, a bustling event that attracted thousands of people to the Highfield Campus of the University of Southampton. In addition to the sewing tables, we created a large mouse nest with enrichment in the form of shredded paper and cardboard houses for the mice where participants could leave their mice.

One conversation really stood out on this day. A mother and daughter made a mouse together and when it came to completing the passport they decided to call it the name of a known mouse model.

When I asked why, they replied that it was the mouse that was the model for their son’s genetic condition. Then father and son (in a wheelchair) arrived and they told me more about the gene-assisted therapy due to be tested on mice soon that they hoped would help their son.

They seemed to know some details about the mice model, including the care-challenges for the particular mice model, how valuable the expertise of local animal care staff was, and how hard it is to keep that model alive.

This event’s colony was named SEF (for Science and Engineering Festival) but some mice were named as SOF mice by mistake. Metaphorically, this reminds us of genetic drift: the slight changes that may happen in a colony as it keeps reproducing over time and mutations accumulate. Our mice for this day, then, are collectively known as SxF. Many of them were taken home with their makers that day, but we have the passports as record of these interactions. 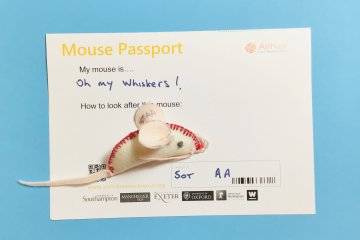 This interaction was run as part of the Being Human festival and was used to assess the activity’s suitability for families. 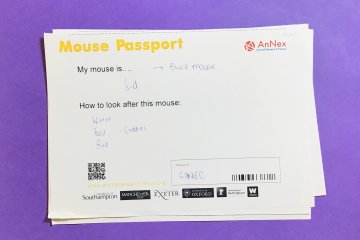 The GON (Geographies of Nature) colony was created by Geography undergraduate students at the University of Southampton on the 2nd of May 2019. 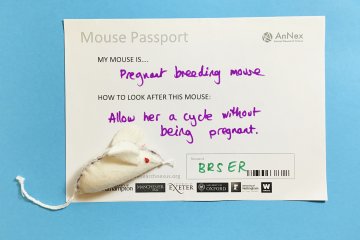 This small colony was the result of our second pilot. These mice were created by members of the Animal Research Nexus team during a meeting in Bristol (hence Bristol Colony) dedicated to our public engagement programme.